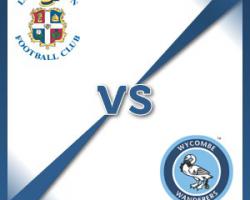 Luton V Wycombe - view commentary, squad, and statistics of the game live.Smith may miss out for LutonLuton may have to manage without Jonathan Smith when they host Wycombe.The influential midfielder rested his knee and sat out the Hatters' 1-0 defeat at Newport last week and he will be assessed by the club's medical staff as they search for their first win or point in five games, but this match may come too soon for the 28-year-old.Winger Ryan Hall returned to the matchday squad but did not feature against the Exiles and Luke Rooney is also back in training and pushing for inclusion in the 18 but Nathan Doyle and Mark Tyler may have to miss out once more through injury.This League Two battle will take place at the Prostate Cancer UK Stadium after Luton decided to rename their Kenilworth Road home for one night only to support the Football League's official charity partner.Wycombe will assess defender Sido Jombati ahead of their trip.The former Cheltenham full-back missed the 2-2 draw with Accrington as he had not fully recovered from his foot injury but the Chairboys hope he can feature against the Hatters.Matt McClure is available again after the striker served his three-match ban while Hogan Ephraim could also return having missed the last two games through illness

His return means boss Gareth Ainsworth may be able to name his full complement of seven substitutes for the first time in five matches.Brentford duo Nico Yennaris and Sam Saunders agreed deals on Monday to stay with the Blues until the end of the campaign and the pair are both likely to keep their places