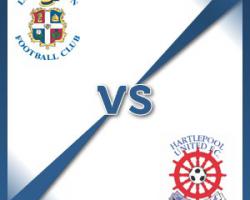 Luton V Hartlepool - view commentary, squad, and statistics of the game live.Doyle worry for LutonNathan Doyle is an injury concern for Luton as they look to keep their play-off hopes alive against relegation-threatened Hartlepool.Doyle limped out of the goalless draw at Dagenham on Tuesday night with a calf strain

The midfielder did not train on Thursday but it is hoped he will do so on Friday, giving him a chance of being involved at the weekend.Paul Benson will begin a three-match suspension after the club lost its appeal against his red card

The ban means the striker will not be eligible to play again this season, unless the Hatters reach the play-offs.Alex Lawless (shingles), Mark Tyler (knee) and Pelly Ruddock Mpanzu (back/hamstring) remain out for Luton, who are three points adrift of a coveted top-seven spot.Hartlepool striker Marlon Harewood is pushing for a recall to the starting line-up after firing his side's late equaliser in the midweek draw against Accrington.Fellow forward Scott Fenwick is also hoping to be involved

He was a half-time substitute on Tuesday night after recovering from an ankle injury.Manager Ronnie Moore has no new injury or suspension worries as his side bids to extend the one-point gap between themselves and the bottom two.Midfielder Michael Woods (broken leg) and defender Matthew Bates (leg) remain sidelined