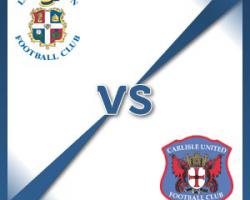 Luton V Carlisle - view commentary, squad, and statistics of the game live.McNulty banned for HattersLuton captain Stephen McNulty is suspended for the visit of Carlisle.McNulty received a straight red card late on in the draw with York on Tuesday night

It was the big defender's second dismissal of the season so he must now serve a four-match ban.Nathan Doyle also faces a spell on the sidelines

Defender Luke Wilkinson (groin) is another midweek casualty for the Hatters and he will be assessed ahead of Saturday's game.Meanwhile, Alex Lawless, Pelly Ruddock Mpanzu, Scott Griffiths and Luke Guttridge all featured for the development squad this week

Griffiths, who has had a bout of illness, is set for a return to the side, while Guttridge is the most likely to feature of the returning midfielders as his fitness is ahead of that of Lawless and Ruddock.Carlisle midfielder Kyle Dempsey returns to contention following suspension, but the club is waiting to learn the full extent of goalkeeper Mark Gillespie's latest injury.Dempsey missed the midweek home defeat to Shrewsbury following his dismissal in last week's win against Tranmere and boss Keith Curle must decide whether to recall him or stick with Brad Potts.Gillespie, hit by long-term knee and groin injuries in the last year, was withdrawn 20 minutes before kick-off on Tuesday night and replaced by Dan Hanford, who is expected to continue.Centre-half Troy Archibald-Henville's troublesome knee will be assessed, but he could return to contention, although teenager Patrick Brough will be hoping to retain his place after Tuesday night's recall