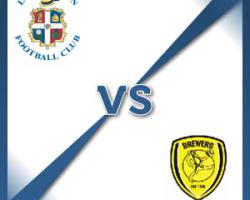 Luton V Burton Albion - view commentary, squad, and statistics of the game live.Griffiths fit for HattersScott Griffiths will be available for play-off chasing Luton when title contenders Burton visit Kenilworth Road.The left-back has delayed a hernia operation - initially meant to take place on Thursday - after coming through 90 minutes at Tranmere and receiving the green light to continue playing from the surgeon.On-loan striker Elliot Lee will also be in the Hatters squad

The West Ham man has missed the last three games with a hip injury.Elliot Justham is set to continue in goal with first-choice stopper Mark Tyler close to a return for Luton, who on Monday halted a seven-match losing run with victory at Tranmere to keep themselves firmly in contention for a top-seven spot.League leaders Burton will probably be without Damian McCrory after the left-back suffered a calf injury in the win against Wycombe.Forward Lucas Akins is fit and available after a bug ruled him out on Monday - the same bug kept midfielder Robbie Weir on the bench.Meanwhile, Stefan Maletic and Mickael Antoine-Curier are both building up their fitness following absences with hamstring problems."Mickael has got the final assessment with the physio, training-wise, so from Monday he will be with the group again," said Burton boss Jimmy Floyd Hasselbaink

"Maletic has been training with the group but is still far away."